In a state battling malnutrition, where the Government—even though willing to do something—is bogged down by lack of resources, NGOs have a crucial role to play when it comes to socioeconomic development. The tie-up between Akshaya Patra and the State Government to serve mid-day meals in Uttar Pradesh is an example for others to follow.

Akshaya Patra has become a familiar name in several parts of the country; courtesy, the nutritious meals it serves to school children as a part of the Mid-day Meal Programme—arguable the largest programme of its kind in the world. For this, the organisation has got into a tie-up with ten state governments across the country, including that of the state of Karnataka, where it all began in 2001.

Akshaya Patra began with 1,500 children in 2001. The ‘will’ was always there; so it was a matter of time before the organisation started expanding reaching as far as Assam in East, Gujarat in West, and Uttar Pradesh in North. Of the 22 centralised kitchen units The Akshaya Patra Foundation (TAPF) runs in the country, two are located in the state of Uttar Pradesh: one in Vrindavan and the other in Lucknow.

The Vrindavan kitchen is among one of the earliest kitchens the Foundation started. It was opened in August 2004, effectively making Uttar Pradesh only the second state where the NGO had expanded its operations. It was ISO 22000:2005 certified in 2008. As of 2015, this kitchen serves 166,078 children of 1,870 schools in its catchment area.

Its second kitchen in Uttar Pradesh was set up by the NGO in Lucknow just over a year ago. It was inaugurated on 15th March, 2015, by the Chief Minister of the state, Shri Akhilesh Yadav. It serves 11,373 children of 110 schools in and around the city of Lucknow. Together, the two kitchens feed 177,451 children of the state’s government schools.

Watch the video of CM of UP, Akhilesh Yadav inaugurates Akshaya Patra Kitchen in Lucknow:

Unlike the Akshaya Patra kitchens in South, which follow a rice-based diet, the two kitchens in Uttar Pradesh follow a wheat-based diet with roti as the staple component of the meals served. Besides roti, these kitchens also serve khichdi, dal, vegetables, etc. The aim is to provide stipulated calories and protein to children. 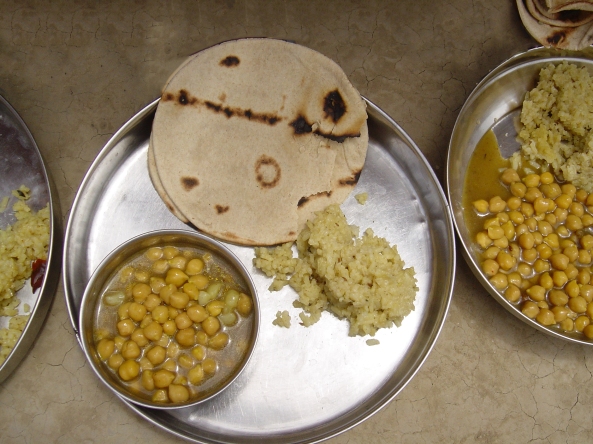 After Vrindavan and Lucknow, the State Government is expected to provide mid-day meal in Uttar Pradesh‘s other cities such as Kanauj, Varanasi, Kanpur, etc.

Even Akshaya Patra intends to expand to other parts of the country in a bid to reach out to more children. That shouldn’t really come as a surprise, considering that the NGO aims to reach 5 million children by 2020 and more importantly, eliminate classroom hunger. You can play a crucial role in the NGO’s pursuit of 5 million children by contributing.

When you donate to feed children in need, you are basically ensuring that they don’t have to work to support their family. Instead, they can concentrate on schooling as education is the way out of poverty for most of these children.