It’s been over a week since we entered 2018. And, most of us would have strictly tried to stick to our New Year resolutions. Most popular among them, of course, are those relating to diet and weight loss.

It’s still not too late to start off on a resolution. Why not resolve to donate to charity this year. You could do so by contributing for the causes supported by The Akshaya Patra Foundation. By opting for regular payments, you will be happy that you are able to stick to the resolution and, the best of all, contribute to a worthy cause.

Akshaya Patra’s Mid-Day Meal today reaches over 1.6 million children across the said 12 states in the country. The children are supplied from 34 kitchens from 12 states.

A mere Rs 950 can feed a school-going child for a whole year. Imagine, the impact such a small amount can have.

The change that it can bring out in the life of a child by guaranteeing he/she can stay at school and not worry about lunch ensures that the child can stay focused on the task at hand, that of learning.  This is perhaps the biggest of the advantages of mid-day meal scheme.

The funds needed to support the growing movement, no less, can in fact be boosted. This can ensure that the children continue to enjoy wholesome meals every day. The Foundation has been tech-savvy. It has taken to online fundraising to stay with the times so that you can be part of the movement.

Have you experienced the feeling of making a difference? It’s fulfilling. Many Akshaya Patra donors have helped Mid-Day Meal Programme in reaching out to millions of school children every day. Whether it’s a small or big amount, we are sure that the amount has made a big impact. Donating not only creates a positive environment for children’s future, but also ensures your good health by leaving you joyous. Incredibly!

How to make a difference by donating? 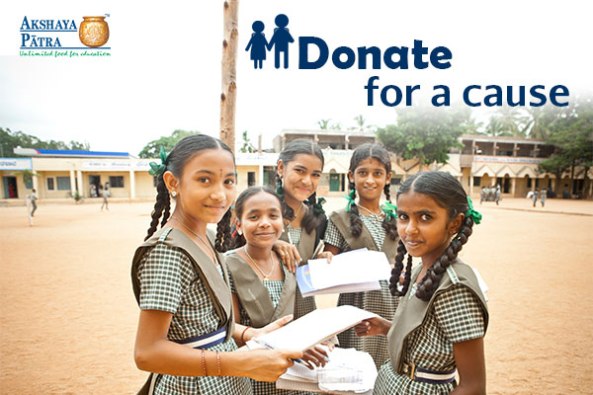 If you have not tried donating earlier, you might be a bit skeptical about donating for a cause. What we would like to say is try something small. For example, a simple thing you can do is gift a stationery kit or an exam kit to a child who comes from an economically weak background. Here are two ways you can make a difference by donating towards children’s growth.

There are millions of Akshaya Patra beneficiaries whose responsibility could be in your hands. Out of millions of children we reach out to, you could take responsibility of one by donating Rs 950. This amount ensures the child receives mid-day meals for an entire year! Also, the good news is your donation, under section 80G of Income Tax, can get you 100% income tax exemption benefit. All you have to do is choose to sponsor a child.

Many children drop out of school and colleges due to the burden of fees. While the Indian Government has taken a great initiative to provide free education for children between 6 to 14 years, many children, once they move out of high school, their expenditure blocks them from studying further. You can take the responsibility to identify the person and pay his or her fees for the year! This will fulfill their dreams to learn!

What does Akshaya Patra do?

The Akshaya Patra Foundation is an NGO in Gujarat, Uttar Pradesh, Karnataka and many other states, feeding over 1.6 million school children every day. The organisation takes pride in having encouraged millions of children, through mid-day meals, to enroll in schools and be a part of education system. What makes this organisation the world’s largest NGO-run feeding programme is noteworthy; the organisation began its humble service in the year 2000 with immense support from government, corporates, donors and many volunteers who have contributed to the cause and also donated to charity, the organisation has grown in leaps and bounds.

You can support Akshaya Patra’s Mid-Day Meal Programme by donating for this cause while you also have the option to fundraise on our website.

Independence to Republic Day: In 1930, The Indian National Congress christened January 26th, that is the last Sunday of January as Independence Day. However, it took us more than 17 years to become independent after that. On January 26th, 1950, it was named as the Republic Day. On this day, India’s constitution came into effect.

The Republic day 2017 marks 68 years of officially being a Republic. As we continue to build our nation one step at a time, let us pledge to make a difference. As we remember the birth of our constitution and recite our preamble, let us believe in creating a healthy community. As we talk about equal opportunities for all, let us ensure that equal opportunities reach those in need. 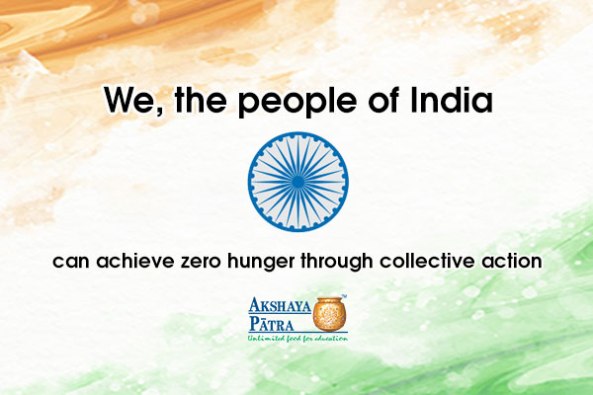 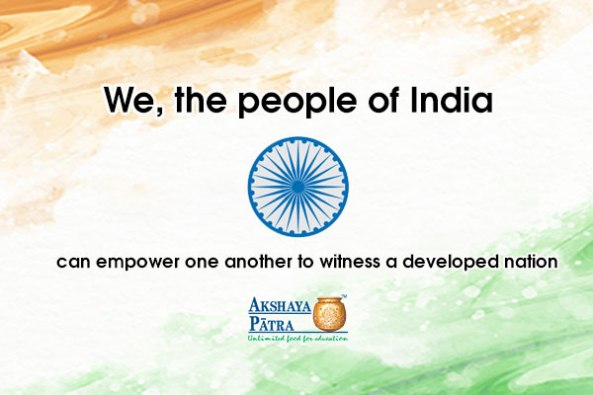 We hope your Republic Day celebration begins by feeding the hungry to create a healthy India. Happy Republic Day!