73rd Indian Independence Day brings up memories of heart-stirring sacrifices, inestimable struggles, heart-warming patriotism… it also gives us moments to revel in the remarkable achievements and progresses India has made since its Independence on 15th August 1947… and it also looks forward to the answer what are we doing for an inclusive progress of the country, here onwards….

15th August, a day of national pride, indeed stirs up the patriotic chord in all of us. This is one day when all Indians feel the spirit of freedom in unison; this is one day when we truly feel the significance of being liberated from the rules of a foreign power. For many, this is also a day to pledge resolutions to serve the nation in whatever way possible.

Clichéd it may sound but today’s children are tomorrow’s leaders. A nation is so much liberated as much healthy and secure the childhood of its children are. So, let’s dedicate this Independence Day to the children of the nation. Like it or not, even after 73 years of independence, there are millions of children in India who are yet to receive the assurance of daily meals and schooling. To alter this situation in the best possible way and in the most sustainable manner, many charitable organisations have dedicated their efforts and time to children.

Similar is the focus of The Akshaya Patra Foundation, a children charity in India that has been relentlessly working to support education of children by providing them with nutritious mid-day meals at school. The Foundation, in partnership with the Ministry of Human Resource, Government of India and various State Governments implements the Mid-Day Meal Scheme across 12 states of India. At present, this children charity in India is providing wholesome meals to 1,765,597 children studying in 15,668 Government schools and Government-aided schools situated in 45 locations.

Since its inception in 2000, Akshaya Patra has grown from feeding 1,500 children to nourishing 1,765,597 children in 2019. The ambitions of these children and the visible impact that regular mid-day meals have been creating over the years motivates Akshaya Patra to expand its service to bring more and more children under the ambit of the Mid-Day Meal Scheme. 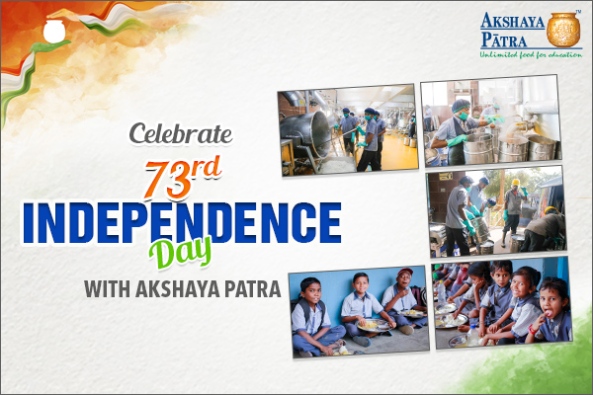 #PledgeToFeed is a platform created by Akshaya Patra this Independence Day where you can support as many children as you wish to. Your generous support today will create the foundation for a nourished and nurtured India. Your support will definitely lead Akshaya Patra in the path to achieving the mission of feeding 5 million children by 2025.

This 73rd Indian Independence Day, celebrate the spirit of freedom with 1.76 million children. Let’s together nourish, educate, and empower children of India.